Visual Studio Code has moved quickly from “what’s that? Part of Visual Studio? No? Then why did they call it that?” to become the hub of much of my daily work. This post contains a few of the things (5 to be precise) that I’ve done to make it work better for me. Maybe you can glean something useful. Maybe you can teach me something about how you use it – post a comment.

You can use VS Code to write JavaScript, C#, CSS, HTML and a raft of other languages, use its native support for Git and install extensions for AL (obviously), developing Azure Functions, integrating with Azure DevOps, managing Docker, writing Power Shell, adding support for TFVC…

Having said that, I’m not a big fan of having lots of extensions that I only occasionally use. I’m pretty ruthless in uninstalling stuff I’m not using in Chrome and Android. VS Code is the same. If I don’t use it all the time I generally go without it. (For those of us that make apps for a living it’s a sobering thought that our prospective users are likely to be the same).

VS Code has a built in terminal. I use PowerShell a lot during the day to manage containers (with the navcontainerhelper module), manage Git and various tasks with our own module to call the with Azure DevOps REST API. It’s nice to also be able to do all that from within VS Code.

These ideas aren’t strictly to do with VS Code, but tweaking PowerShell and Git to make them more efficient for you.

You can set this in the Advanced section of the properties of the shortcut. This will force VS Code to always open as admin. 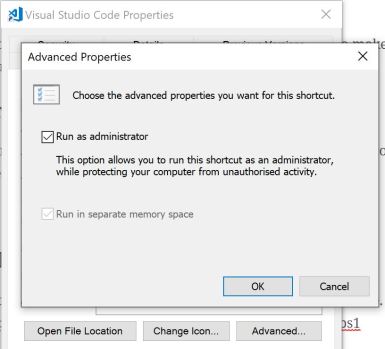 I believe Freddy K is working on some changes to the navcontainerhelper module that will remove the requirement to run the cmdlets as admin. That would be nice.

Have PowerShell automatically execute some script on loading by editing your profile. PowerShell has a built-in $profile variable which points to the location of your .ps1 profile file.

I use that file to import the posh-git module (below) and our own TFS Tools module. You could create the file with something like this (sc is an alias for the Set-Content command):

Note: PowerShell ISE has a different profile file to PowerShell.

I mostly use Git from the command line. I started using the command line rather than a GUI as I found it helped me understand what commands are actually being used – how fetch is different to pull, how to set tracking information for a branch or edit a remote.

And yes, perhaps there is small part of it that boosts my shallow sense of “I’m a real developer, I type weird commands into a prompt rather than clicking a button on a GUI”. It’s OK to admit that. I draw the line at Vim though.

If you’re planning on using Git in PowerShell you’re going to want to install the posh-git module.

It adds some details into the prompt (see above): the branch that you are on, how it compares to the remote branch that it is tracking and the status of your index. It adds tab completion all over the place as well – indispensable.

If you do start using Git from the terminal you’re probably going to find typing some of the longer commands quite tedious. For instance, git log –graph is great to get an overview of your project and has loads of switches to alter its output. I tend to use:

To show a graph of all the branches (remote as well as local) with commit details on a single line each.

It gets you something like the above. You can see the commits that each of the branches is pointing at, which branches commits are included in and how work has been merged over time.

I don’t want to type the full command out each time though. Fortunately, Git doesn’t force you to. You can create an alias. I have:

There are lots of opportunities – more than 5 – to enhance and tune VS Code and PowerShell to make your daily work more efficient. Check it out.

View all posts by james

James Pearson is a Product Manager for Clever Dynamics. He loves his church, family, music, sport and writing about himself in the third person.